Another common question I get is what soldering irons do I use...

SOLDERING IRON I USE.

I used this one because it is temperature controlled with three programmable temperature settings. It is a 60 W iron and can heat up to 450°C. Extra wattage is ideal for heating up larger copper areas. Even so, I would not recommend going for a soldering iron with less specification than this one.

I generally use 400°C for what I call lightweight soldering, and I use for 450°C and soldering larger copper areas, or if I am in a huge hurry and want to solder to melt quicker as I can normally solder pretty fast as well

I generally use one of the smaller tips as I am generally doing fine work. Though if you're doing a lot of through-hole components, or generally larger parts, or heating parts on large copper areas, a larger tip would be more ideal for this.

Another thing I use a lot as a gas soldering iron....


I have had this one the years, not really had much trouble with it. It comes with if you attachments. A large chisel tip, which is handy for when I need to solder something on my van. I could simply put chisel tip on take it outside do some soldering on something..

For Atari work, I mostly use the hot air nozzle. Basically to warm up large copper areas quicker, sometimes they can be a struggle just with normal soldering iron on its own. I also used to gas iron for reworking SMT devices.

There are cheaper alternatives about such as these..

But I strongly recommend is not buying either of those. I have had nothing but trouble with them, and gave up after a day with them. It is why I went with the more expensive one, and generally it is still going years later.

So if you want to go with gas soldering iron, go for a more expensive one, as the cheap ones are just total garbage.

One of the little more unusual things is a heat blower/gun. These are not the heat guns as sold in DIY shops. They are normally 2000 W and are far too vicious for desoldering work etc.

These are generally sold in craft shops for embossing work. Normally they are around 300W. Some I have seen also have two heat settings for 150 W and 300W for example. Though they seem a little harder to find.

I find these tools useful for SMT rework and also heating up large copper areas that I am struggling to solder with just a soldering iron alone.

For those who are confused between the gas soldering iron on the heat blower, the gas soldering iron is very focused and you can only heat up a few millimetres at a time. This is ideal if you just want to re-solder couple of small pins or something like that. Though sometimes more heat is needed to totally remove a SMT part, in which case the heat blower is a lot easier as it has a much wider heat area.

I generally would advise not going with anything any hotter, as it is far too easy to burn and blister circuit boards. It could take 30 seconds to a couple of minutes or longer to remove apart with this blower, but the point on which to solder melts generally appears gradually. The problem is generally the temperature that the solder melts, is only just below temperature that the PCB blisters and burns. So doing this slowly is the way to go.

So if a higher wattage blower was used, you would ramp up the temperature 10 times faster and likely burn circuit board. It is also not good to ramp up the temperature on any parts this fast anyway. So nice gradual rise of the temperature with 300 W or thereabouts blower is a pretty safe bet.
https://www.exxoshost.co.uk/atari/ All my hardware guides - mods - games - STOS
https://www.exxoshost.co.uk/atari/store2/ - All my hardware mods for sale - Please help support by making a purchase.
Top

If you want to spend a little more, I can wholeheartedly recommend the ERSA i-con pico/nano (nano beeing the ESD version of the pico)

I recently bought one, since my Weller WHS40D broke (cannot recommend this one, to weak, to cheap).

The i-con nano is 68 Watts and with very good build quality. You immediately notice the small, light but very handy iron and the surprisingly heavy station. But the real surprise comes, when you turn it on: It heats up to 360°C in 9 (!) seconds. Yes, no more turning on the soldering iron in case you need it later... this thing is hot before you found your soldering tin...

In addition it features three fixed temperatures as shortcuts, standby modes with reduced temperature, separate station and holder with very small footprint and a huge choice of tips. Oh and of course a soft and flexible cable

Here is a nice video to show heating times and thermal power compared to a ERSA RDS80:

Maplin brand cheap soldering iron, it's not too bad, picked it up years ago in a sale around £10 it was. A huge improvement on the basic hardware store fire sticks you get for £2 with a screwdriver like bit stuck on.

This things ok, only used it a handful of times, mine sprang a leak and I had a "Exxos" situation in my hands

The lighter it comes with is crap though and it's very heavy on the gas. I mainly used to use the hot air blower part of this to remove flash memory from devices... sure beats a lighter. My most expensive and most used. Aoyue 906 Got it off some hobby electronics German site years ago, the iron is actually quite good. It was the cheapest air station about at the time, I think it was on sale though. The air pump is very noisy, takes up loads of space and you can never find the lead to power the thing. I use this for repairing car ECUs and the like since they have huge heat sinks sucking up any heat you through at them soldering becomes a issue.

This clone soldering iron I got at a market for £10 and i loved it, not used it in ages, heats up really fast and can hold the heat. It's just some Chinese brand. Getting tips for it are a right pain though they just don't fit exactly. These things are all over AliExpress so. 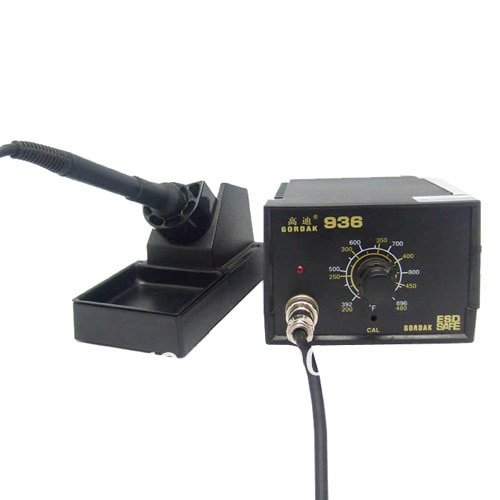 DrF wrote: ↑
Wed Dec 27, 2017 12:19 pm
This clone soldering iron I got at a market for £10 and i loved it, not used it in ages, heats up really fast and can hold the heat. It's just some Chinese brand. Getting tips for it are a right pain though they just don't fit exactly. These things are all over AliExpress so.

used to wait forever for my old soldering irons to heat up..

I'm assuming here I ordered the wrong ones, but it is really difficult to work out which tips fit which irons half of the time.

Whip it out and start using it then

I do hope you on about them soldering irons... well to be fair neithers getting any use these days..

I got 3 complete old PCs now since I been cleaning up... old is relevant they still better than mine :/
Top

I got 3 complete old PCs now since I been cleaning up... old is relevant they still better than mine :/

There you go, you have the space, you got the tools and talent

I am looking at getting a Weller iron, something like this one..

Lucky to get a few weeks out of them. So looking to buy a new iron and hope Weller tips are still as good as they used to be.

I see you are looking at the password protected version there Exxos.

Why on earth would you need password protection on a soldering iron.

Nice bit of kit though.
Top

I use the Hakko 888D. Not the best I’ve ever used but it gets th job done
———
I get cranky when asked to repeat myself.
Top
Post Reply
27 posts