Atari talk, or the life and the universe and things. Just keep it clean!
Locked
14 posts

if you wish, we can also compare expanded machines.
and yep, till now, expanded Falcon (CT60/100) is still faster than expanded with A1200.

The falcon was of course sold in three memory configs. To me it makes sense to count a 2meg fast/ 2 meg Chip A1200 as stock when facing off against a falcon. In both cases they're only using the intended memory slots the designer gave them, and both were sold like that new by dealers. What I'd say is not stock is when you start upgrading everything else - Atari never intended anyone to start hanging 060s off the thing. So nothing that fundamentally changes how it works.

I could also say that a 1MB Falcon is the slowest computer ever made, considering with a config like that it'd not be able to run anything worth turning it on. A 14MB one cost the same as a decent second hand car, so let's go with the 4MB as a reasonable example.

CT100 type of mods is another question entirely. If you have too much money there's the BlizzardPPC boards, and after a short wait of about 10 years longer than promised they even got out an OS release to support it properly.

there is no reason to call this topic "pissing" because both machines was ok at the time.


Falcon was sold with 4MB/14MB by Atari. I guess due the price, the most popular configuration was 4MB. Therefore Falcon with 4MB was stock/unexpanded machine.

a lot of my friends used stock Amiga 1200 because it was fine for games for them.
At the same time we had 50MHz Falcon accelerators

but based on benchmarks still fastest than A1200.
also e.g. in the same hires 256 color mode,GUI Falcon was faster than GUI A1200 (what is obvious due to Falcon's better memory performance)

Yeah, thread title is really not OK. And I'm pissed because of people writing things without checking it first. Falcon with 1MB RAM ? No, there was no such.
"I could also say that a 1MB Falcon is the slowest computer ever made" - no, it would be slowest one if could attach Satandisk to it, but sadly it has no ACSI port

There is 2 kind of people: one thinking about moving to Mars after here becomes too bad, the others thinking about how to keep this planet habitable.
Top

Yeah, I didn't like the topic either, so I changed it.

Besides this is a dangerous subject so lets keep it clean and stick to facts!
Ingo

I don't know if "Sim City 2000" and "Star Strek: 25th Anniversary" games ever got ported to the Atari, and hence the Falcon, but it would be interesting to see how well they ran.

On an Amiga A1200 with 40MHz 68030 + 8MB RAM trap-door expansion the former is way too slow to play (and seems to be emulating a Mac underneath) and latter is not that quick either.

"Elite 2: Frontier" is nice and smooth though, slightly more so than on the TT, which is probably to do with the relative processor speeds (40MHz vs. 32MHz).

I must admit that I'd not want to use the Amiga without the accellerator. Having said that, many games are limited by the video chipset data throughput bandwidth rather than the processor. The AGA chipset became the bottleneck.
Intro retro computers since before they were retro...
ZX81->Spectrum->Memotech MTX->Sinclair QL->520STM->BBC Micro->TT030->PCs & Sun Workstations.
Added code to the MiNT kernel (still there the last time I checked) + put together MiNTOS.
Collection now with added Macs, Amigas, Suns and Acorns.
Top

I'm surprised multiple people think the Falcon was only 4/14mb. 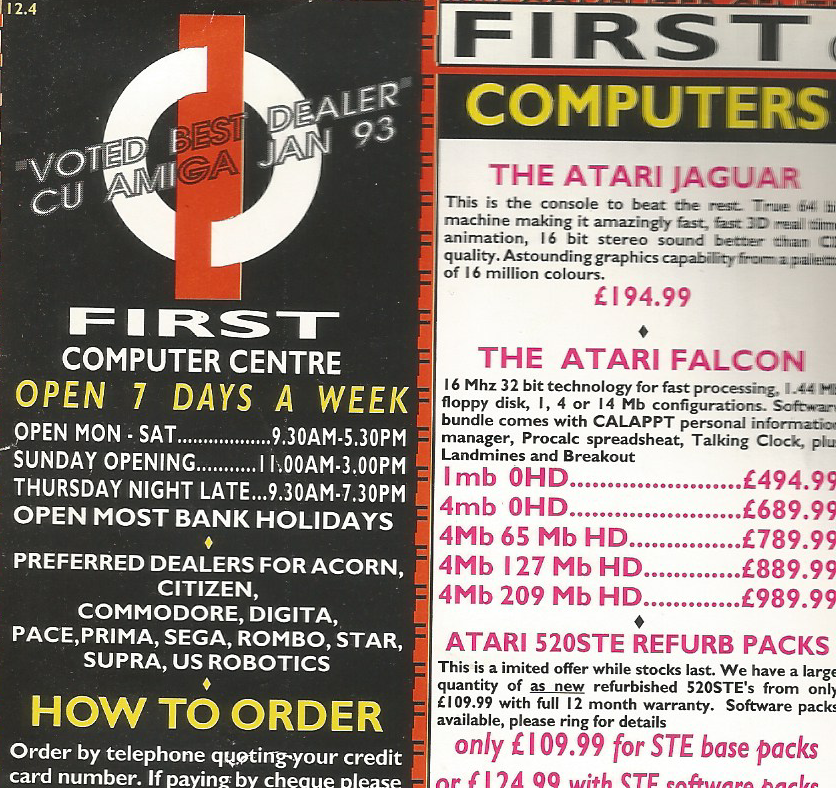 Forgotten because nobody in their right mind would buy one?
Top

I'm surprised multiple people think the Falcon was only 4/14mb.

Forgotten because nobody in their right mind would buy one?

I was bought one back in 1993 as that's what my family could afford, then upgraded it each year until 14MB + HD.

It was nearly £200 cheaper than the 4MB model, I suspect it may have been cheaper to use a 3rd party RAM card to upgrade it.

If I remember correctly the 1MB RAM board was just a 4MB board with 3MB disabled and could be re-enabled with a bit of hardware know how...I could be wrong about this but I'm sure I read that somewhere.
Top

In Germany there were no 1MB Falcons for sale, at least I did not see any in shops or adverts. 200 $ price diff for 3 MB seems too much (would be some 660 DEM for 1993). In those years RAM was not so expensive, at least not most time - surely there were sometimes some price booms, as usual. But my comment was mostly because that "1MB Falcon is the slowest computer ever made" - huh - why it would be slower than Falcon with 14 MB ?
There is 2 kind of people: one thinking about moving to Mars after here becomes too bad, the others thinking about how to keep this planet habitable.
Top

Because it fits their narrative, even though it's factually incorrect