All information relating to connecting your ST to a modern TV/monitor.
Post Reply
8 posts • Page 1 of 1

For my small home computer collection, I stumbled upon the XRGB Framemeister when I was in need of a method of converting old and sometimes a little off video signals to (more or less) modern displays.

It is a japanese Upscaler that is specialized on old gaming consoles and therefore is an option for connecting a ST(E) to a modern TFT as well. It is pricey but very universal, so it's well suited for someone who wants to connect a variety of systems to the same display.

You will find a very good introduction and usage guide here:

In addition for anyone considering a Framemeister for his/her Atari ST(E) or basically any other system:

I recently found out, that the image adjustment range of the framemeister depends on the resolution of the connected display. I used a Dell 20" TFT via DVI (Dell 2007) with a native resolution of 1920x1200 Pixels. Although the Framemeister can use this resolution in full, you won't be able to allways position the image centered and full screen.

I often read, that the Framemeister only uses 1080 lines, even if connected to a display capable of showing more. But since I was able to position the image at the extreme top and botton of the display, this seems not to be the case. At least not any more, maybe it was resolved in one of the latest firmware versions.

But nevertheless the Framemeister was appearantly made to use 1080p resolutions as maximum, so when using higher resolutions you will have to compromise on adjustment range.

In lack of a spare 1080p display I now use a 19" Display with 1280x1024 and 5:4 aspect ratio (Dell 1907) with my framemeister. It gives me a lot of adjustment range and I have been able to scale the input signal to fullscreen in most cases without using the zoom. When I use the zoom I like to enlarge the screen area within the overscan, when the screen content is small and does not use the overscan area. This gives a better immersion in games but of course in apps as well.

Although the framemeister theoretically can accept a 31kHz VGA signal on its RGB-Input (when you combine H/V-SYNC to CSYNC) , it is not officially supported. I experienced crashes and distorted image on it, so this is no option for ST HiRes. The advantage of using a 1280x1024 Display is, that you can directly connect the ST to its VGA-input, and it can simply line double the 640 horizontal pixels to 1280. When applying the line doubling to the vertical resolution, you end up with 800 lines used and 224 left empty and a very crisp image.

On a sidenote: The 50% gray default background in highres is perfect for letting the display autoadjust on the signal. Whenever you have to adjust a display or your framemeister, I recommend of doing so by using a 50% gray background. The interferences show clearly when you approach integer scaling.

The disadvantage of using a (cheap) monitor, or at least most of them: They will most likely only be capable of displaying 60Hz. When you are on a PAL machine (50Hz) or using HiRes (70Hz) either the display or the Framemeiste will have to do a framerate conversion. The Framemeister is really good at this, but nevertheless you will never have perfectly smooth horizontal scrolling.
Ingo

Here are some pictures I made to show the image quality. Naturally these suffer from slight interference, but you get the idea.

This is the STE in high res connected via VGA to the Dell 1907:

Same screen zoomed in a bit:

And here we have some pics of Low Res output via the framemeister to the same display:

Same screen with zoom enabled on framemeister, so it becomes fullscreen: 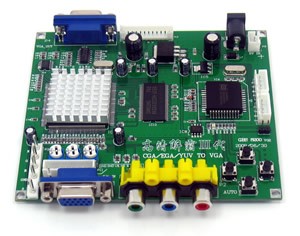 These things claim to do a few different types of input and output (in this case VGA), there's loads of versions about and of course badly translated manuals etc. so you don't really know what's going.
Top

Those are the ones which most people have tried. I heard mixed views on it for a long time.

The Framemeister looks to have good video quality going by the images. I had various upscaler boxes and it just killed the nice sharp RGB outputs.

I was talking to Urban (UBE creator) about feeding the shifters RGB output directly into such a upscaler, basically avoiding the analogue input parts. It was only a idea, but someone needs to try it out

The pictures are in fact worse than it looks in reality. You always have a moire when trying to take pictures from a display...

Downsides of the framemeister are of course the price, the somewhat complex setup and in the special case of the ST(E) the inability to input all display modes.

In addition the underlying video controller chip went out of production, so that the framemeister at some point won't be available. Right now there is more than enough stock, at least the manufacturer says so. Most likely there will be a successor, but nothing for sure right now.
Ingo

I have one of these, picture is really bad but that' s enough to test things in ST med or low when testing the 68020 card.
Based on Ingo's Framemeister pictures, it's obviously of a way higher quality (hence the price).
All of my atari stuff is in boxes ight now as we're about to have some construction done on our house. But once that's done I might get a Framemeister for the Ataris (I mostly test in ST high using a simple home made ST to VGA cable)
Ingo, thanks for posting these, that's really helpful when looking for a way to get a good picture from old computer.

As always you get what you pay for then

Most of the cheaper adapters I have seen have used the AL250 chips coupled with a Micronas chip. Though the AL250 has digital inputs.. it would be interesting to try hooking up the shifter outputs to the digital inputs, bypassing the RGB output circuit. Though the RGB output on the ST isn't to bad overall. Most of the "noise" is generated on the upscalers board itself.. just bad design/layout as normal. If it was designed properly, I think it would offer a pretty awesome TV output.
https://www.exxoshost.co.uk/atari/ All my hardware guides - mods - games - STOS
https://www.exxoshost.co.uk/atari/store2/ - All my hardware mods for sale - Please help support by making a purchase.
viewtopic.php?f=17&t=1585 Have you done the Mandatory Fixes ?
Just because a lot of people agree on something, doesn't make it a fact. ~exxos ~
Top
Post Reply
8 posts • Page 1 of 1